Google has announced that its latest update, Caffeine, is ready to go live, and will shortly start rolling out across its datacentres.

Caffeine is the first major update to Google since the Big Daddy update caused such chaos a few years ago. Caffeine is almost a complete rebuild of the Google indexing system, and is intended to improve speed; both speed of indexing and speed of delivery, and Google expects a considerable improvement in the "freshness" of results, particularly in the news sector, and this was born out in the results from the developers "sandbox" version that was opened for testing in August.

Google don't expect us to see too much change in search positions (but they said that about Big Daddy too!), but realistically we can expect to see quite a bit of fluctuation in results while Caffeine rolls out.

As always, Google is keeping things a bit quiet about what changes its made to the indexing algorithms, but results from the sandbox suggest that there is slightly more emphasis on keywords on the page, and also on the inclusion of thematically related terms, which is all good from the point of improving relevancy over popularity, but until we see results coming from Caffeine its will be difficult to assess.

Our advice is to keep your nerve and wait for the dust to settle over the next couple of months before starting to worry about changes to your positions. 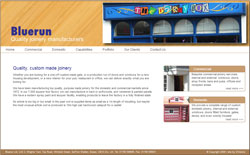 DVisions has launched a new website for Essex based joinery company Bluerun Ltd.

Bluerun has been manufacturing top quality, purpose made joinery for the domestic and commercial markets since 1972, at their 7,000 square foot factory outside Braintree. Bluerun manufactures in hard or softwoods, and veneered & painted panels, and have a modern spray paint and lacquer facility, enabling products to leave the factory in a fully finished state. 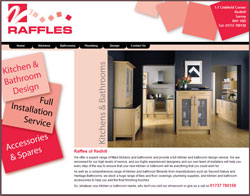 DVisions has recently launched a new website for Raffles of Redhill. Raffles are a long established kitchen and bathroom design and installation company based in Redhill, Surrey. Raffles provides a full kitchen and bathroom design service, and can supply all leading brands. Raffles has its own team of installers and is renowned for its high quality and value for money service.

As well as the kitchen and bathroom design services, Raffles operate a wholesale plumbing division, and can provide a full range of plumbing supplies to both trade and retail customers from its showroom in the centre of Redhill.

A very simple "online brochure" style site, the aim of the new website is to increase awareness of Raffles and its core services in its local marketplace. 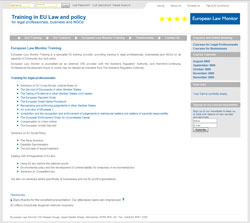 As part of the launch of the new training services, a new website has been launched specifically for the training side of the organisation's activities. The new design is very clean and simple so that potential clients aren't distracted from the content, and a design derived from this concept will shortly be rolled out for the main  European Law Monitor site. 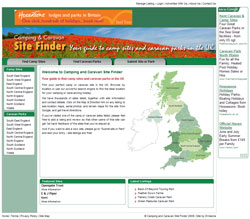 We have just launched a new camp site and caravan park directory for the UK.

Camping and Caravan Site Finder is a directory of camp and caravan sites in the UK. The site core is built in Joomla, and the directory is powered by the SOBI2 directory component.

As well as a directory, the site also features affiliate and advertising management elements, and phase two of the site build will include both eCommerce and classified advertising components.

The SOBI2 directory provides the facilities for site visitors to add, rate and review directory listings, and each entry is linked via postcode to Google maps where visitors can see local maps and aerial photos, and get travelling directions.

Listings on the Camping and Caravan Site Finder site are currently free, although the SOBI2 system does allow the creation of paid listings, and the handling of "Featured Listings" where listing owners can pay extra for inclusion in featured listings displayed across the site.

You have allowed cookies to be placed on your computer. This decision can be reversed.