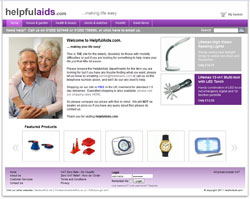 FL Services has started a re-vamp of its e-commerce websites in partnership with DVisions.

FLS already has a portfolio of e-commerce websites including GardensRUs, ClocksandWatchesRUs, and Gifts4You, and the new site launched this August, Helpful Aids, complements these existing businesses.

With Helpful Aids now launched, a programme of design and feature upgrades will take place on the other sites, together with new marketing initiatives to promote all the sites. 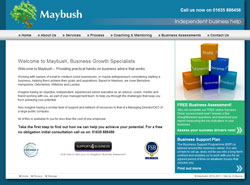 We are pleased to announce the launch of a new website for small business consultants Maybush.

Maybush are business growth specialists working with owners of small to medium sized businesses, helping them achieve their goals and aspirations.

Maybush are based in Newbury, and cover Berkshire, Hampshire, Oxfordshire, Wiltshire and London and provide a wide range of support for small business owners, ranging from business analysis and planning to coaching and mentoring.

The site is a straightforward Joomla CMS based site using a custom designed template. 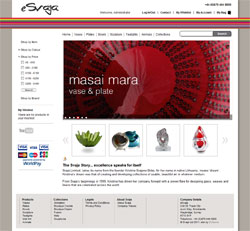 Fresh off the stocks in June is a new e-commerce website for leading art glassware creators Svaja, called e-Svaja.

Last year we had the pleasure of creating a new trade e-commerce website for Svaja to showcase their product and provide media and image resources for their customers and the press.

The new site is aimed at the public and is intended to make it easier for the public to purchase one off items and to show off some of the ranges that aren't necessarily available through retail outlets. 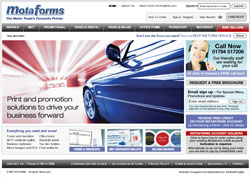 Motaforms is a division of the Whitehill Publishing Group, and specialises in printed stationery and over-printed supplies to the motor industry. They also supply a comprehensive range of customised printed promotional products and sales, forecourt, and workshop products. With visual designs by Whitehill's in-house designer, the new website is a full e-commerce enabled site to showcase their products and make it easier for both existing and new customers to buy online.

After nearly three years of development, the latest Joomla version, v1.6, was released in January. Having been through several version updates since initially Mambo, then Joomla 1.0 and then 1.5, experience has taught us to be cautious of jumping too quickly into early adoption of major new software versions.

This is for a number of reasons. Even after months of Alpha, Beta and "RC" testing, inevitably some bugs and flaws materialise once developers start to use the new software for real applications; and many of the third party component developers may not yet have released fully stable versions of add-in components.

Because of this we are adopting the following strategy for the implementation of Joomla 1.6:

The choice of which system we use for a particular site will be dependent upon the "best" option for the particular site: for preference it will be using the new 1.6 version, but if the components to delivery the required functionality are not yet available or stable, we may be  forced to use the 1.5 version. As we know from our experience of the 1.5 launch, once the new final release version is released, the component developers very quickly upgrade their software to suit, so in practice means this probably means that 1.6 will be the version of choice for pretty much everything going forward!

Joomla v1.5 is a solid and stable package with excellent functionality, so for existing sites we will not be recommending any sort of automatic migration from 1.5 to 1.6 unless there is any particular requirement to modify the site functionality. Upward migration is quite a significant task, and as long as sites running on the the current 1.5 version are stable and secure there is no obvious reason to go through the extra expense of the switch.

If at a later stage site changes are planned, then we will be offering upgrades as part of that process where appropriate.

As regards ongoing support, Joomla 1.5 remains fully supported by the development team until at least April 2012.

You have allowed cookies to be placed on your computer. This decision can be reversed.

How is your web site performing?

Get a FREE no-obligation SEO audit of your website.

Our free report will check your ranking in the major search engines and highlight any usability or technical issues together with advice on how to fix them.

Send me a FREE SEO Audit!